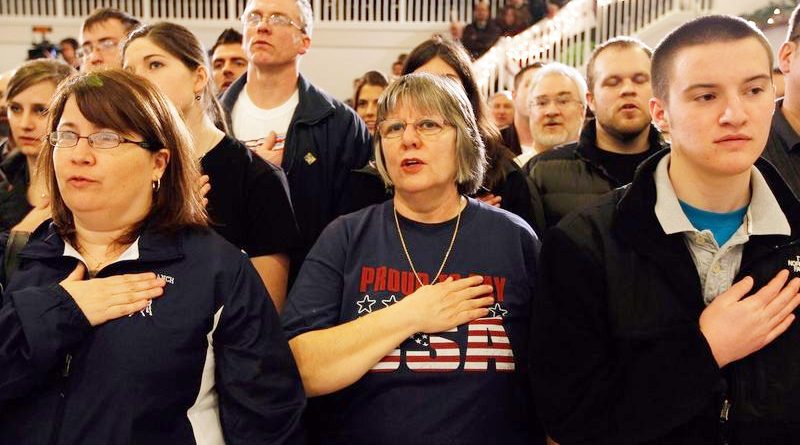 A recent exchange between Tucker Carlson of Fox News and Univision anchorman Jorge Ramos—“This is not a white country”—marks a significant turning point: Suddenly people on national television are talking about the end of white America, the rising tide of color, and what demographic change really means. White advocates may owe Señor Ramos a “thank you” for his forthright Hispanic chauvinism, which forces whites to think seriously about dispossession. Too many whites would rather look the other way, and since Fox News won’t (yet) invite Jared Taylor to talk about it, Señor Ramos will have to do.

Entirely aside from his dreams of reconquista, Jorge Ramos and others on the left want America to become non-white so that it moves further to the left, so that Democrats can win more elections. To put it simply: Less white means more left. Leftists, particularly Hispanic ones, talk about this openly.

The Hispanic intellectual Ruy Teixeira is a good example. His biography at the leftwing think tank, Center for American Progress Action Fund, says this:

He is also co-director of the States of Change: Demographics and Democracy project… The goals of the project are to document and analyze the challenges to democracy posed by the rapid demographic evolution of the United States from the 1970s to the year 2060 and to promote a wide-ranging and bipartisan discussion of America’s demographic future and what it portends for political parties and the policy challenges they—and the country—face. . . . Teixeira’s recent writings include “America’s Electoral Future: How Changing Demographics Could Impact Presidential Elections from 2016 to 2032” and “States of Change: The Demographic Evolution of the American Electorate, 1974–2060.”

In 2015, Dr. Teixeira (pictured left) helped put together a useful and graphics-filled guide to the increasing power of non-white voters, broken down by state, over the course of the next few decades.

Why is the left’s most important think tank tracking this?

Dr. Teixeira himself furnishes the answer. In 2002 he coauthored a book called The Emerging Democratic Majority, which argued that the Democratic Party would soon be winning election after election largely because of the increasing non-white vote. When President Obama won reelection in 2012 despite Mitt Romney winning as much of the white vote as Ronald Reagan had in 1980, Dr. Teixeira explained to the Washington Post that he had seen it coming: “It’s always nice when your assessments seem to be pretty close to the mark. This has been going on for a while, and has been confirmed in the 2010 Census.”

In 2016, after Donald Trump won, Dr. Teixeira wrote a short essay for Vox called, “Trump’s coalition won the demographic battle. It’ll still lose the war.” The title says it all.

More recently, Dr. Teixeira wrote a book called The Optimistic Leftist: Why the 21st Century Will Be Better Than You Think, which is meant to combat the ennui that has come over much of the left since President Trump’s victory. I attended a promotional event for this book that featured two other dedicated leftists: Stanley Greenberg, who runs a leftist consulting group, and John Halpin, an employee of the Center for American Progress.

The thesis of Dr. Teixeira’s new book is that the future of the left is looking up because whites are in decline. Early on, as Mr. Halpin explained:

[W]hat we’re seeing in America and in Europe, Western democracies, is this decline of the old industrial working class. And a rise of more multicultural, economically open, tolerant population. . . . [O]ver time this should produce the potential for progressive majorities, but what do we do in the meantime? . . . Because we haven’t fully gotten to a place where obviously rising populations and their ideologies dominate our politics. There’s a lot of residual power for the old industrial white working class base . . . the older declining populations . . . .

In other words, there are still a lot of whites fighting progress, but fewer every year. Mr. Greenberg responded:

What’s going on in the country is so powerful and so beyond our control. We talked about, you know, diversity, you know immigrant diversity, growth of Hispanic population, [decline of] marriage, all these things. But, what happened in the last decade, and accelerated in the last five years, and it’s accelerating as we go, is the millennials have grown, become more diverse, and moved to the cities. . . . There’s been a huge growth globally of foreign born populations, and one in five are in America . . . our vote has become more urban, central, and their vote has become more rural, and, you know, older. [italics added]

Mr. Greenberg is talking about race—just not explicitly.

First off vigorously and confidently oppose the most reactionary elements of this Trumpian or rightwing populism that we’ve seen. . . . I mean they’re basically building a lot of their appeal on declining demographics. . . . Just push back and don’t be afraid. Time and history is on your side.

Like Mr. Greenberg, Dr. Teixeira is talking indirectly about race. “Time and history is on your side,” means that non-whites and liberals are sure to dominate, and there’s nothing whites can do about it.

The left has always backed demographic transformation because it makes it easier to reach their policy goals. That is why white advocacy is so overwhelmingly “conservative” today, even though it is not inherently either conservative of liberal. Defending the race should come first and politics second. But in an era in which not even “conservatives” dare defend their race, liberals seem genuinely eager to sacrifice their race in the interests of political goals. They crush whatever racial instincts they have left, as they imagine the leftist paradise they hope to build with the help of their non-white allies.

But for how much longer? As the Democrats battled over whether their party would be run by a black Muslim named Keith Ellison or a Dominican “civil rights lawyer” named Tom Perez, how many white Democrats had to stifle impure thoughts about their own displacement? When former spokeswoman for the Bernie Sanders campaign Symone Sanders explained that “we don’t need white people leading the Democratic Party right now,” how many of those unwanted white people wondered if the party would ever need them?

Dispossession comes for the left before it comes for America. Not all white liberal will step aside obediently when a “person of color” tells them to. Some will realize that all this talk of “time and history” means that whites get left with the scraps. As Chris Roberts has noted, there is an incipient anti-anti-white left, and this is the first step towards a pro-white left.

Jorge Ramos and Ruy Teixiera are helping draw the battle lines, and more and more white liberals may soon learn on which side their real interest lie.

3 thoughts on “Why the Left Wants a Non-White America”