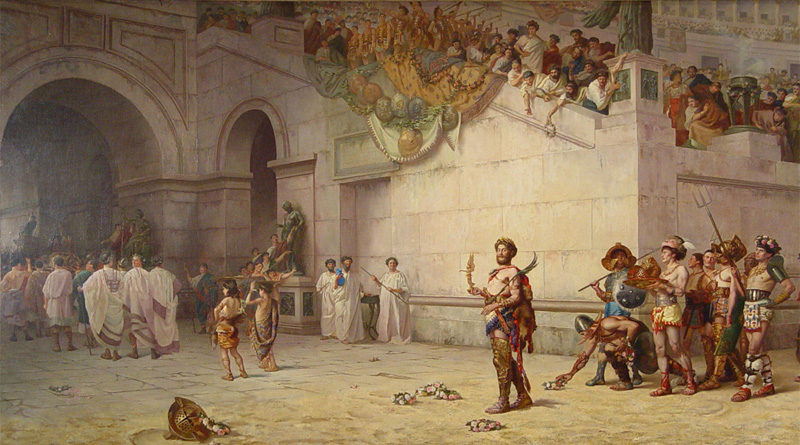 In analyzing the ballot fraud surrounding the latest US presidential election the name of the Roman poet and politician Juvenal comes to mind. His Satire VI, raises a fundamental political question surrounding political repression in the contemporary liberal System: Quis custodiet ipsos custodes? “Who will guard the guards?” In contemporary bidenesque English this rhetorical question, coined by Juvenal, in the first century, can be transliterated into: “Who will observe the ballot observers?” “Who will count the ballot counters?”

A century after the death of the poet Juvenal the Roman Emperor Marcus Aurelius, who combined the virtues of philosopher and soldier, faced the same dilemma. How to treat the defeated foe? By preaching tolerance and magnanimity, or by wielding the sword? Despite his stoic awareness about the transience of all life on Earth, Aurelius knew that when fighting the barbarians, a free man cannot live by books alone — he also needs a solid sword, or in the case of the USA he needs the Second Amendment. Unlike many of his predecessors Marcus Aurelius did not contemplate self-isolation in debauchery; nor did he hang around the hookers in ritzy parlors on the Quirinal Hill in Rome. He preferred the company of his soldiers who protected the northern and eastern borders of the empire in the turbulent second — borders that stretched in the north along the limes of the Drava river which now separate modern Hungary from Croatia. The Pannonian basin during the Aurelian times was under the constant onslaught of military intruders coming from the North and the East. Today this area has become anew a major route for new illegal intruders, i.e., Afro-Asian migrants heading toward the heart of Europe: Germany.

Aurelius’ grandfather, the emperor Hadrian, a couple of decades earlier, waged also devastating wars in the shaky southern part of the empire — against revolutionary Jews in the Roman province of Judea. His legions killed and displaced more than half a million of them, thus leaving an indelible anti-European grudge in the Jewish collective memory. Worse, out of his resentment for rebellious Jews, Marcus Aurelius, in 130, changed the name of the city of Jerusalem into the city name of Aelia Capitolina. The morale of history? Each victor changes the toponomies of conquered lands and along with it he imposes his own political narrative.

Can we draw the parallel between Aurelius and Trump? Both the USA and Europe are facing today similar turbulent scenarios where peoples of European ancestry will soon have to make a choice: how to preserve their racial and cultural identity in the face of the coming migrant storms. The present turmoil in the USA is just a natural follow-up to the great racial replacement that has been going on over the last 70 years, both in the United States and Europe.

The present Covid virus is only a small part of a “narrative history” – or “history of the event”—which the French call l’histoire évènementielle, i.e., a slice of history solely focusing on one single and separate event. Such an isolated historical event, e.g., the Covid shutdown, is relatively unimportant unless it becomes a factor speeding up a larger flow of history. The Covid scare is already going viral, forcing all EU/US politicians to reexamine a larger stretch of their historical memory, going back to 1945. Undoubtedly, four years of President Trump’s slamming the mainstream media for spreading fake news has significantly undermined the intellectual and diplomatic narrative of the post-WWII Order. Many myths and mendacities imposed upon Europe and Whites in the aftermath of 1945, thanks to Trump’s presidency, have now fallen apart. Trump’s foes in Europe and the US do not like this.

After WWII, and especially after the end of the Cold War, the politics of Europe turned into a carbon copy of US policies. Whatever was going on in high politics in Washington DC had to be either copied or mimicked the next day by the political class in Berlin, Paris and Vienna, and the day after, all over eastern Europe. President Trump was the first US president in the last 75 years who seriously shook the foundations of the transatlantic liberal consensus. This is the reason why the Deep State in the EU and in the US resent him very, very much. If America goes bust and starts breaking up tomorrow, the breakup of the EU will immediately follow suit.

Changes in America have always had an impact on European politics. This is especially true of the German political class, which, over the last 75 years, has been grotesquely doubling down on US-inspired liberal globalist agenda for fear of being for fear of being accused of harboring revisionist and paleo-fascist sentiments. The insulting label of “fascism,” “racism” or “colonialism” keeps haunting paranoid politicians in Germany and in the rest of Europe, making them embrace the safe strategy of self-denial and forcing them to be more papal than the pope, i.e., more Americanized than Americans themselves. At the moment of this writing, it means that the entire political class in Germany and the EU must endorse president-elect Biden and his running mate Harris, irrespective of their likely own hidden pro-Trump sentiments.

Just as America is being balkanized at its extreme now between the supporters of Trump and supporters of the Deep State, so is Europe being polarized at its extreme between proponents of state sovereignty and proponents of globalism. The wartime years of 1941–1945 haven’t resolved anything. We are back again in the weimaresque and balkanesque epoch, both in the USA and the EU. The winner-takes-all will soon change the political language and define thereafter his version of historical truth. If the American left gains the hegemony they so ardently desire — hegemony that is entirely within their reach, if not now, then certainly in the near future as demographics become even more decisive — it will be the end not just of the people and culture of traditional America, but of the entire West.