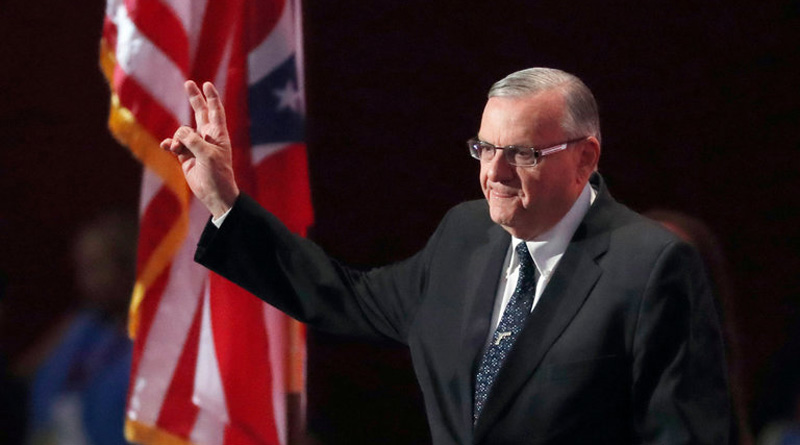 U.S. President Donald Trump on Friday granted a pardon to former Arizona lawman and political ally Joe Arpaio, the self-proclaimed “toughest sheriff in America,” less than a month after he was convicted of criminal contempt in a case involving his department’s racial profiling policy.

Trump had signaled this week that the first presidential pardon of his administration would go to Arpaio, 85, whom he has frequently praised for his hardline immigration stance.

“Sheriff Joe Arpaio is now eighty-five years old, and after more than fifty years of admirable service to our Nation, he is [a] worthy candidate for a Presidential pardon,” the White House said in part in a press release.

Arpaio, an outspoken critic of undocumented migrants as well as an ardent supporter of Trump, appeared on the presidential campaign trail with the Republican candidate in 2016. He was said to be under consideration for a pardon last week by Trump, and was all but promised clemency by the president during a rally in Phoenix on Tuesday.

“I’ll make a prediction. I think [Arpaio]’s going to be just fine, OK? But I won’t do it tonight because I don’t want to cause any controversy,” said the president, alluding to a pardon. “Is that OK? … But Sheriff Joe can feel good.”

The White House said Arpaio exemplified “selfless public service” throughout his life and career. “Throughout his time as Sheriff, Arpaio continued his life’s work of protecting the public from the scourges of crime and illegal immigration,” the release said.

As sheriff of Maricopa County from 1993 to 2016, Arpaio gained national notoriety for his hardline positions and unconventional punishments for prisoners. He was frequently accused of racial profiling regarding his practice of arresting and jailing undocumented immigrants, and was sued over the issue in 2007.

In 2013, a U.S. District Court judge ruled the county’s actions to be discriminatory and in violation of the Civil Rights Act. This led to a contempt charge when Arpaio’s office refused to yield on its conduct. He has yet to be sentenced after being found guilty on July 31.

Arpaio endorsed Trump’s presidential candidacy in January 2016, going on to appear at campaign events with the businessman-turned-politician and eventually speaking at the Republican National Convention. Despite his elevated national exposure, Arpaio was defeated in his own election in November by an almost 13-point margin.