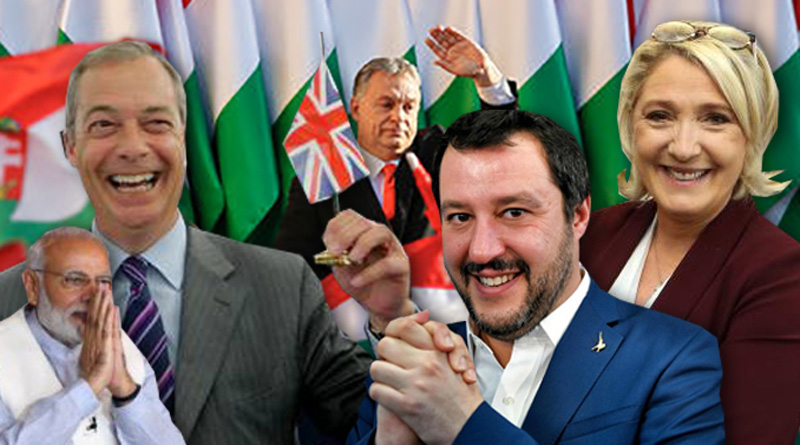 Nationalists and populists the world ‘round made their voices heard loud and clear in recent elections in both Australia and the European Union (EU), riding the wave of populist sentiment and dissatisfaction with liberal elites pushing multiculturalism, open borders, and a radical “green” environmentalist agenda, dissatisfaction that was so well capitalized on by Donald Trump in the 2016 election.

Two weeks ago, Australian Prime Minister Scott Morrison stunned the elite political pundits and talking heads who had predicted his defeat for weeks by winning re-election. Morrison leads a coalition of national parties that maintained support in both the suburbs of Australia’s major metropolitan areas as well as in the countryside. The recently re-elected prime minister has voiced his admiration and support for Trump in the past, and it was clear he tapped into the populist talking points and agenda that helped the celebrity businessman-turned-politician fare so well in the last U.S. presidential election.

“Tonight is about every single Australian who depends on their government to put them first,” Morrison declared at his victory party in Sydney after the election results were in. “And that is exactly what we are going to do.”

During the election campaign, Morrison championed populist economic issues, arguing for economic stability and support for the middle and working classes that have been negatively impacted by the harsh reality of economic globalization, stagnant wages, and an increasing pool of foreign workers, economic migrants, and so-called refugees hoping to find a safe haven in Western countries like Australia. On the campaign trail, Morrison advocated for lowering energy prices and cutting costs for home buyers, among other populist issues.

“It has been those Australians who have worked hard every day. They have their dreams, they have their aspirations, to get a job, to get an apprenticeship, to start a business, to meet someone amazing,” Morrison noted, “to start a family, to buy a home, to work hard and provide the best you can for your kids, to save for your retirement. These are the quiet Australians who have won a great victory tonight!”

Leading up to the election, political analysts were virtually guaranteeing a left-wing Labor victory, with one commentator boldly declaring that the election was “unlosable” for the Australian Labor Party. The so-called “quiet Australians,” often derided and dismissed by the liberal political and media elites in Australia, threw a major wrench in their election forecasting and caused a devastating blow to the cosmopolitan, globalist liberal elite.

The Labor candidates had run on a platform focusing on climate change and environmental issues, increasing government funding for social services, and ending tax cuts for the wealthy, issues that are increasingly not resonating with working- and middle-class voters who are more concerned with economic stability, jobs, and the negative effects of globalism and open borders.

“The U.S., Britain and Australia—perhaps Canada too—may be in the midst of a populist uprising,” David Winston, a Republican adviser and strategist, recently argued following the election. “Populism usually arrives when governmental leaders are not addressing the agenda the country at large wants.”

Winston continued: “What these countries with different elections and different electoral systems in very different parts of the world all face is a working and middle class that understands the importance of climate change but doesn’t understand elites who consistently make climate change a higher priority than jobs, wages, the cost of living, and health care. What all these voters, who upended the political status quo and defied expectations in recent elections, share is a strong and sincere belief that elites, and only elites, in their societies control their government and its agenda. And they believe these elites neither respect their views nor care about their problems.”

Meanwhile, European nationalists and populists also fared well in the recent European Parliamentary elections, which wrapped up this past weekend. Euroskeptic parties and anti-establishment voices made considerable gains in the EU elections, ensuring a radical shake-up of the ruling governing coalitions in Brussels.

Voter turnout throughout much of Europe was at its highest levels in 20 years, with voters in many major European nations—including Italy, France, Germany, and the United Kingdom— largely rejecting the mainstream political parties that have ruled for so long. The election results made clear that the major political factions to be contended with are now the more anti-EU forces on the right and the environmentalists on the left, as both forces made significant gains while the mainstream center-right parties (EPP) and the Socialists and Democrats (S&D) each lost seats overall.

In France, the political party of current French President Emmanuel Macron, a globalist with close ties to the international community, lost to Marine Le Pen’s more right-wing political faction. In Italy, Deputy Prime Minister Matteo Salvini, a leading populist in European politics and a major critic of mass Third World immigration into Italy and Europe more generally, made significant gains as his League Party won roughly one-third of the country’s vote, ensuring his party will become one of the largest parties and political blocs in the European Parliament. Nigel Farage, whose Brexit Party made significant gains in its first-ever electoral contest, was a big winner in elections held in the UK, demonstrating that the more right-wing, Euroskeptic faction of British politics is still a force to be reckoned with.

Following the elections, Salvini reached out to Le Pen, Farage, and Hungary’s nationalist leader Viktor Orban in an effort to form a coalition of nationalists and populists that could effectively work together to combat the nation-wrecking policies of the globalist forces who have heretofore dominated the EU. Salvini and other European nationalists had campaigned together leading up to the election as well, with a major rally organized by Salvini and attended by Le Pen and other right-wing political leaders in Europe taking place shortly before Europeans went to the polls.

The recent electoral success of populists and nationalists in both the European Union and Australia are a sure sign that voters are increasingly disillusioned with globalism, open borders, and forced multiculturalism so forcefully promoted by the agents of the New World Order.

John Friend is a freelance author based in California.

2 thoughts on “The Rise of the Nationalists”