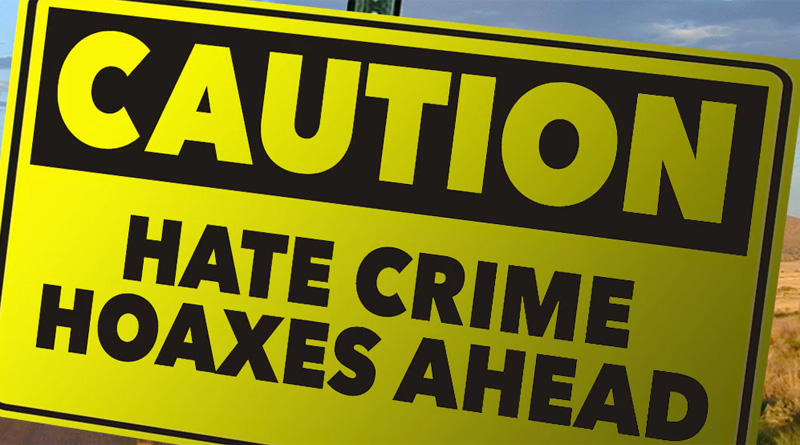 Mistaken identity is always a risk when a witch-hunt hysteria takes hold, and the hunt for “hate” in the Trump era has produced a mob mentality that rivals 17th-century Salem. Just ask Michelle Grissom, a Colorado middle-school teacher who may lose her job because she mistakenly identified the wrong Covington Catholic School student in a viral video — and called him a “Hitler Youth”!

Ms. Grissom has been placed on leave from her position as a social studies teacher at Mountain Ridge Middle School in the Denver suburb of Highlands Ranch after deleting her Twitter account and apologizing for her error. The Kentucky student she meant to defame as a Nazi — Nick Sandmann — is now arguably the most famous Catholic in America, thanks to video of his Jan. 18 confrontation with activist Nathan Phillips in D.C., but Ms. Grissom instead “doxed” Covington Catholic junior Jay Jackson. Unfortunately for her, Jackson did not accompany his classmates on the trip to Washington for the annual March for Life. Instead, he was 500 miles from the nation’s capital, playing basketball in a tournament in Middletown, Ohio. Adding to Ms. Grissom’s misfortunes was the fact that Jay’s father is a successful obstetrician who, to say the least, did not take kindly to having his son labeled a Hitler Youth. After the gravity of her error became apparent, Ms. Grissom issued an abject apology and also resigned her post as local teachers union official.

The real victims of “hate” hoaxes are European Americans…
To paraphrase Britney Spears: Oops, they did it again. The doxing of Jay Jackson was not the first time the search for “hate” has targeted the innocent. Indeed, it was the second time in less than a month that mistaken identity has sent the witch-hunt mobs chasing the wrong suspect.

In Houston, the family of a murder victim has apologized for inadvertently suggesting that 7-year-old Jazmine Barnes was killed in a racially motivated hate crime. When her family’s car was targeted by gunfire Dec. 30, one of Jazmine’s sisters saw a white man in a red truck speed away from the scene of the drive-by shooting and mistakenly thought he was the shooter. After police issued a sketch of the white suspect, activists including “Black Lives Matter” leader Shaun King apparently leapt to the conclusion that this was a hate crime, and the story attracted nationwide media coverage. “We want to emphasize the racial nature of the attack and that hate-crime charges are appropriate,” civil-rights attorney Lee Merritt told the Washington Post.

Except the white man in the red truck was innocent. He raced away from the scene of the shooting because he was afraid of being shot himself. Police instead arrested two black men who evidently opened fire on the car driven by Jazmine’s mother in the mistaken belief that it belonged to someone they had been in a fight with at a bar the night before. The national media immediately lost interest in the story, because black-on-black violence is not deemed newsworthy. What the network news producers want is some kind of “hate” they can blame on President Trump, and a random drive-by shooting doesn’t help advance the media’s partisan agenda. Of course, media bias existed long before Trump was elected, and there is a documented history of liberal journalists being hoodwinked by hoaxes that appealed to their prejudices.

Two of the most notorious such hoaxes — at Duke University in 2006 and the University of Virginia in 2014 — involved false accusations of rape against “privileged” white male students, a favorite theme of campus feminists. Others have involved manufactured claims of homophobic hate crimes, like the lesbian professor at Central Michigan University who beat herself up in 2016 and then falsely claimed to have been assaulted by a man at a country music concert. Of course, homophobia and racism actually do exist, and rapes obviously do happen, but incidents that perfectly fit the media’s preferred narrative don’t happen often enough to satisfy the journalistic establishment’s ravenous appetite for proof that America is a nation uniquely defined by hate.

Consider, for example, “violence against women,” a problem allegedly so prevalent in America as to require federal legislation to suppress it. Yet reports of such crimes are often ignored by feminists, even when the violence particularly heinous. In 2017, a 15-year-old girl was rescued from a gang that had forced her into prostitution in the Maryland suburbs of D.C. Police say the gang had pimped out the girl since age 14 and she was savagely beaten with baseball bats when she didn’t turn enough tricks. Feminists have utterly ignored this case because the gang was MS-13, and at least one of the perpetrators was in the country illegally. “Violence against women” doesn’t interest feminists when it’s committed by illegal aliens, because calling attention to these crimes might help increase support for Trump’s border-enforcement policies — perish the thought!

The media’s anti-Trump agenda is what led them into their catastrophic blunder in the Covington Catholic incident. Because several of the students, including Nick Sandmann, were wearing “Make America Great Again” hats, the network TV producers were only too eager to agree with the Colorado teacher who pronounced them “Hitler Youth.” Plenty of liberal journalists have stated their belief that Trump is a latter-day Hitler, and by this logic the nearly 63 million Americans who voted for Trump must be crypto-Nazis. So when the video clip of Phillips in a face-off with the Kentucky students surfaced online Jan. 19, the folks at CNN, MSNBC, and other left-wing “news” operations were easily persuaded that Phillips was an innocent victim of racial hatred. It took barely 24 hours for this to be debunked — Robby Soave of Reason magazine watched about two hours of unedited video that disproved the bogus “hate” narrative — and once again the media had proven Trump right: Yes, they are “fake news.”

Have Trump’s enemies learned any lessons? Oh, liberal journalists have done a lot of hand-wringing about how the pressures of online social media led them to “rush to judgment,” but they refuse to abandon the fundamental prejudice exposed by their blunders. They are irrevocably committed to the idea that any American who doesn’t vote Democrat is guilty of “hate” and so they keep looking for evidence to prove this. No matter how many times they get it wrong, whether by mistaken identity or falling for contrived hoaxes, they won’t quit their witch-hunt, no matter how many innocent lives they might destroy in the process. The media have summoned into existence a Hate-Hoax Industrial Complex that keeps manufacturing fake “incidents,” and it’s only a matter of time before they go stumbling into their next credibility-destroying catastrophe.