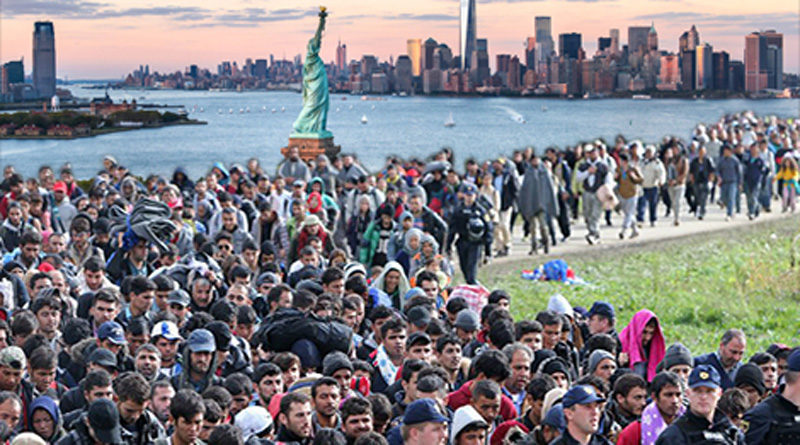 Part 3: Packing our cities with cars, trucks, trains, busses, snarled traffic, gridlocked traffic, too many planes, too many boats

After you received a dose of the sociological impact of another 100 million legal immigrants, let’s examine our accelerating congestion on our highways and inside our cities. What about the skies with 100 million more people flying inside another 10 million airplanes, or using busses and trains?

Again, let me remind you that what’s coming is not “if”! It’s coming if we don’t stop this immigration insanity.

“We’re a nation of immigrants,” no longer applies. We most certainly will become an overcrowded, unsustainable and accelerating nightmare country much like present-day India.

In other words, our U.S. Congress that continually pumps into America over 2.5 million legal and illegal immigrants and their birth rates, annually, will result in our nation jumping from 330 million to 440 million by 2050—a scant 30 years from now.

Have you visited New York City? Have you seen taxis stacked up for hours in Times Square and Manhattan? Have you seen people packed onto the sidewalks like sardines? Have you breathed the toxic air of NYC? What about the sirens, horns and rail traffic 24/7? Sound like a nightmare? Thirty-five of our most populated cities imitate NYC with traffic congestion jamming everyone’s lives six days a week.

If we continue on this immigration path, those 35 of our most populated cities in America expect to DOUBLE their populations within 30 years. So, New York City jumps from 8.3 million to 16.6 million. Los Angeles jumps from 11 million to 22 million, and on down the line. Just try to drive through L.A. traffic and keep your mind! We’ve created a ‘monster’ of a society, but we’re allowing it to grow into a “Kraken.”

Even if there was unlimited oil, we’re burning up the skies with carbon exhaust, acid rain and poisoned soils. Do we want to continue that kind of ecological damage to our planet?

First of all, the Chinese can’t breathe the air they poison in 2020, so just imagine what it will look like by 2050. Where does that leave us with another 100 million cars to transport our added 100 million population? Or, how about another 10 million airplanes, busses, trains and heaven knows how many lawn mowers, ATV’s, motorcycles, four-wheel mules, boats, chain saws, power boats and dozens of other machineries that use gasoline.

Do you see what our country faces? Are you connecting the dots? Again, this isn’t “if” all of this will occur, it’s coming and it’s coming very fast. We have created a monster of an unsustainable society. It’s so big at 330 million that if just a few things go wrong, we could collapse into chaos. Notice when electricity lines breakdown into our big cities: total lawlessness and anarchy.

Right now, annually, we burn over 586 million short tons of coal to produce electricity. That coal poisons our skies with lead, mercury, acids, particles, smog and acid rain. Can you imagine what it’s going to take to secure electricity for another 100,000,000 million people in the next 30 years? Can you imagine THAT amount of carbon exhaust raining down on our soils in 2050? Have you thought about the cost of a gallon of gasoline? How about $20.00 a gallon? Yes, as supplies dwindle as we head toward 2050, and demand multiples by another 100 million immigrants, all of us are screwed into a lower standard of living with higher costs and more economic consequences.

In other words, this party that we’ve all enjoyed WILL soon come to an end. Read the book by Christopher O. Clugston: Blip: Humanity’s 300 Year Self-Terminating Experiment with Industrialism. He shows that by 2050, all our natural non-renewable resources will be exhausted. He spent 10 years researching the figures for his book and he ‘point blank’ shows that our civilization will collapse because those resources will be exhausted within 30 years.

I told you this series will be sobering if not depressing. Guess what, part 4 will become more depressing with facts, figures and ominous realities we face.

So, what do we do? Sit around and cry? Do we repeat what India and China, or Bangladesh did to themselves? What did they do? They just kept multiplying like there was no tomorrow…1.4 billion people in China and 1.3 billion in India. Bangladesh illustrates how miserable a life everyone can live in that country with 161 million people in a landmass less than the size of Iowa. By 2050, they expect to reach 201 million. No one in Asia understands what they are doing to themselves. They’re still adding another 100 million to China and 350 million to India by 2050.

What can we do to save our civilization?

Finally, we need to move on these points NOW, not later, not in five years, and not sometime in the future. If you have more solutions, please write me. Do you see that I am describing a future that allows no escape if we don’t change course? If you don’t see it, what can I research and write to help every American understand the dire consequences of endless mass immigration? In the end, would you like to see yourself living in America in 2050? So, why would you condemn your kids to that harsh reality?