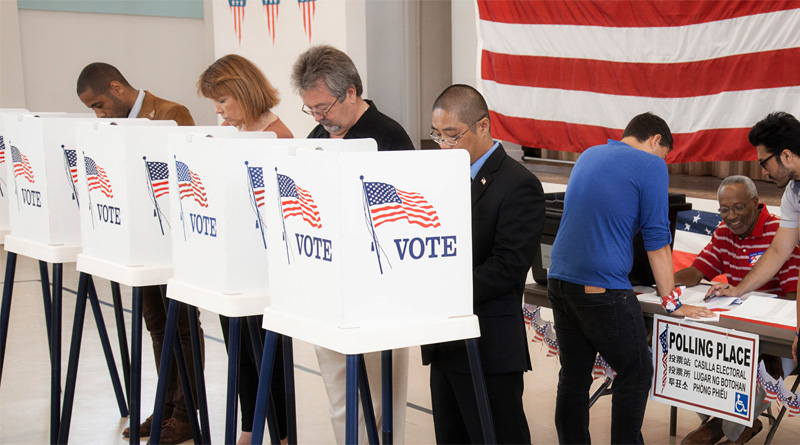 By Earl Holt III — Massive black voter fraud probably stole the hotly-contested 1991 St. Louis School Board Election from conservative reform candidates sponsored by the CofCC, who were poised to win a majority on the Board and end its desegregation program. This is a matter of public record.

Our cries of foul were laughed at by the Corrupt Leftist Media in St. Louis –- particularly the hyenas at the ST. LOUIS POST-DISPATCH — just as President Trump’s claims of widespread voter fraud received the same reaction from these usual suspects.

Six months later –- but too late to reverse the election — an audit was conducted by a handwriting expert retained by the St. Louis Board of Election Commissioners. This audit proved conclusively that untold thousands of illegal votes were cast by black election officials in predominately black north St. Louis.

In fact, four or five black Election Judges actually confessed under oath to the F.B.I. that they had forged the signatures of voters who never appeared at the polls. Owing to cowardice and betrayal by the first Bush Administration, there were never any indictments issued by his “Justice” Department.

Massive Voter Fraud occurs regularly in this country in important elections. It is exclusively an election strategy of the New Marxist Party (mistakenly referred to as “Democrats,”) and 99% of its practitioners are minorities. There are four basic phenomena suggesting this is to be the case.

The first is the aggressiveness of the DNC and every other Marxist group in pursuing Voter Registration. They go to enormous lengths and expense to register everyone they can find, because they must first register a voter in order to illegally “vote” that person in subsequent elections.

For example, the militant immigration group Mi Familia Vota (“My Family Votes”) aggressively pursued voter registration canvassing in “swing states” Virginia and Pennsylvania prior to the November 2016 Election. This was done in an attempt to use newly registered but illegal Latino voters to “tip” the outcome in these states.

Soon after the November General Election, the Public Interest Law Foundation (PILF) uncovered thousands of non-citizens registered to vote in both Virginia and Pennsylvania, thanks to the federal Motor Voter law. Not surprisingly, the Commissioner of the Virginia Department of Elections ordered Virginia’s local election officials “not to respond to (PILF’s) requests for records pertaining to non-citizen voters.”

In Pennsylvania, meanwhile, election officials were so incompetent and ineffectual that they ignored a wave of requests by non-citizens to be removed from Pennsylvania Voter Rolls: These were individuals who were involuntarily registered to vote without their knowledge or consent, and who wished to be removed from voter rolls..

Secondly, the virulence of the opposition by the DNC, Obama “Justice” Department, and the ACLU to state Photo I.D. Requirements is strong prima facia evidence that voter fraud is an important electoral strategy of the New Marxist Party,” and state Photo I.D. requirements hinder such a strategy.

Common sense would suggest that anyone concerned about the integrity of elections ought to be willing to endorse any reasonable safeguards to ensure fairness. Providing Photo I.D.s is such a common practice in the U.S. that the left’s claims of “disenfranchisement” are nothing but lies and everyone knows it, particularly those parroting the argument.

Third, the outrage expressed by the Corrupt Leftist Media and the DNC at President Trump’s plan to investigate voter fraud is a clear indication there’s plenty to hide, and that they greatly fear having their fraudulent electoral strategies exposed to the public. They may be equally fearful of seeing their illegal activities exposed to federal and state law enforcement agencies.

Fourth, the proliferation of state laws stemming from so-called “Motor-Voter Registration” in many heavily-Democrat states is also an indication of their desire to make voter fraud as widespread and as easily accessible as possible.

Two years after the implementation of California’s AB 60 on Jan. 1, 2015, an estimated 806,000 illegal aliens received driver’s licenses, according to the California Department of Motor Vehicles. According to the DMV, about 14,000 of these licenses were issued in November of 2016 alone.

Like the dog that didn’t bark in the Sherlock Holmes mystery, it is not a coincidence that the Corrupt Leftist Media intentionally and conveniently overlook all the corroborating evidence we already have illustrating nationwide voter fraud on a massive scale. Voter fraud is an “inside job,” as well!

The corrupt and dishonest left attacked Gessler for daring to investigate the eligibility of Colorado Voters because they oppose any effort to protect Colorado Elections by verifying citizenship. Those on the left subscribe to an ideology that makes lying an “art form,” so it didn’t matter to them that Gessler was sworn to uphold the integrity of Colorado’s Laws, among which are its Voter Eligibility Laws.

Another defender of honest elections is Kansas Secretary of State, Kris Kobach, who fought in court for the authority of Kansas Election Officials to demand citizenship documents from those who register to vote at motor vehicle offices.

In November of 2016, a Federal Appeals Court –- the henchmen of the “Political Class” — struck down the Kansas law, and Kobach was forced to sign an agreement with the ACLU allowing more than 18,000 motor-voter registrants to cast ballots this November while this absurd litigation continues.

Last year, investigative journalist extraordinaire James O’Keefe and his Project Veritas team exposed the corruption of North Carolina political operatives, who were filmed encouraging people to vote even after they confessed to being non-citizens.

Like their allies in the Corrupt Leftist Media, the ACLU and Obama “Justice” Department conveniently pretend there is no hard evidence of voter fraud. Thanks to the efforts of these systemically corrupt entities, voter-ID laws were struck down in Texas, Wisconsin, and North Carolina.

A former Justice Department election lawyer in the Voting Rights Section, J. Christian Adams, has exposed the treacherous assaults at every level of our election process by traitorous groups funded by Jewish Marxist and billionaire, George Soros.

Recently, Old Dominion University released a study which drew on data from a consortium of universities. This study concluded that there were about 1.28 million illegal votes cast by non-citizens in the November Presidential Election, and more than 800,000 of them went to Hillary Clinton.

Their data suggest that 6.4% of an estimated 20 million adult non-citizens voted in the November Election and that 834,000 of these illegal votes went to Clinton. The study’s conclusions clearly err on the side of caution.

The assumption that Donald Trump received 35% of the votes of non-citizens is very difficult to accept. It’s nearly unimaginable that so many non-citizens voted for Mr. Trump, who had vowed on the campaign trail to implement some of the most radical anti-immigration policies in more than 50 years.

While this pioneering study is on the right track, it has merely scratched the surface of organized voter fraud, and thorough investigations by the Justice Department and Congress — using their subpoena power — are clearly warranted.

ILLEGALS ARE THE KEY

While evidence of dead people voting is somewhat entertaining, it is not a common practice because it’s too simple for Election Authorities to cross-reference Voter Rolls with any state’s Vital Statistics. However, a Colorado woman named Sara Sosa did manage to vote in 2010, 2011, 2012 and 2013 despite having died in 2009. Her husband was also able to vote from the grave.

Of greater concern is the registering of illegal aliens, who have already demonstrated their contempt for law just by residing here.

A study by the Public Interest Legal Foundation found 1,046 non-citizens managed to register to vote in a mere eight Virginia counties. These individuals were only caught because they self-reported their immigration status when renewing their state Drivers Licenses. Moreover, this PILF study does not even include the metropolitan areas of Fairfax County and Arlington.

Last year, Pennsylvania’s secretary of state conceded that more than 43,000 Pennsylvania voters are simultaneously registered in other states, and 700 may have cast multiple ballots in recent elections. However, she claims she is powerless to investigate or prosecute such evidence of “double voters,” uncovered by data researcher Voter Registration Data Crosscheck.

In early January of 2017, allegations of voter fraud in Tarrant County, Texas, initiated an investigation by the State of Texas. The resulting lawsuit focuses on mail-in ballots, which allow people to vote from their homes without any ID or verification of identity. Texas officials are concerned that this form of Absentee Ballot encourages so-called “vote-harvesting,” a practice in which political operatives act as surrogates and vote for others without their permission.

According to a local NBC affiliate, Indiana State Police are in the midst of a statewide investigation into possible voter registration fraud. “Police believe there could be hundreds of fraudulent voter registration records with different combinations of made up names and addresses with people’s real information,” NBC 12 reported. 56 Counties are under investigation, thus far.

The Corrupt Leftist Media could not fail to understand just how extensive U.S. voter fraud really is, but have adopted the strategy of denying any such phenomenon exists. Rather than summarily dismissing its existence, they should be asking how extensive it actually is.

Like its 50-year denial of Soviet infiltration of the Roosevelt and Truman Administrations, the Corrupt Leftist Media understand the stakes involved, and will continue to deny the obvious truth, long after it has been proved conclusively. This is only to be expected from the cheerleaders and PR flacks of the New Marxist Party.

If the American People ever become sufficiently aware of the extent of the New Marxist Party’s massive and nationwide voter fraud strategy, we might see a political realignment that would permanently destroy the power and influence of all Marxists, as well as that of their cheerleaders and PR flacks in the Corrupt Leftist Media. (END)