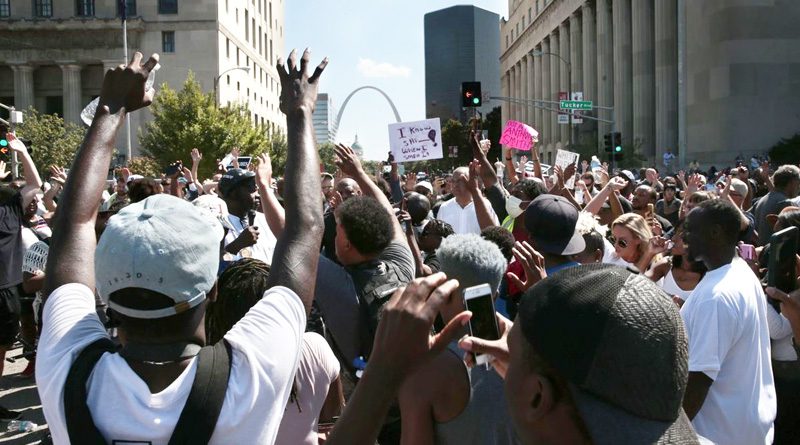 Proving they are children –- intellectually, emotionally and morally –- blacks and their communist allies have begun rioting in St. Louis in response to a Not Guilty verdict in the case of a city Police Officer acquitted of murdering a black career criminal.

Their violence and destruction are the tantrums of children: Whites did not react in such a manner when lazy, witless and mentally-defective black imbeciles wrongly acquitted O.J. Simpson or hundreds of other guilty black murderers.

Blacks murder whites and other blacks tens of thousands of times each year, but the only incidents that seem to generate any interest or outrage among them are the exceptionally rare instances when some police officer is forced to shoot to death some violent, black career criminal.

Blacks are infantile in many other ways, as well, particularly in their nearly universal refusal to accept responsibility for their own behavior, and their reflex-ive need to blame some outside agency for their own failings. In fact, their outrage is really a diversionary tactic, much like their endless excuses.

For example, if they are to be believed, it isn’t violent black crime that has reached a crisis level in the U.S., it is “racist law enforcement” that has become the “real” problem.

Similarly, the “sub-prime” mortgage crisis was not the fault of irresponsible black deadbeats — who never bothered to make their loan payments — it was caused by “predatory” banks that bent over backwards to ignore terrible credit histories in order to give blacks federally-guaranteed low-interest mortgages.

Likewise, high rates of cigarette and alcohol consumption in black areas are not caused by low character or the absence of self-discipline, they are caused by “predatory” advertising campaigns by the manufacturers of such legal vices, who capriciously “target” black neighborhoods.

Not long ago, two nigro ministers announced that they were suing Coca-Cola, alleging the company’s products kill more black people than the street violence routinely found in black areas. Their artfully crafted “sound bite” was that the black community loses more members “to sweets than to the streets.”

These two charlatans would have the public believe that sugary drinks are a greater cause of early death among blacks than a host of other variables, such as the fatty foods they crave, cigarettes, illegal drugs, poor dietary habits in general, ubiquitous alcohol consumption, violent crime, obesity and a sedentary life that comes courtesy of our Trillion-Dollar per year federal welfare system.

The outrage they routinely exhibit is really a diversionary tactic, because it is designed to divert attention away from the fact that blacks have become synonymous with crime in general, and murder in particular.

They are also synonymous with drug-dealing, which precipitated the incident culminating in the police officer’s trial. If blacks were not so invested in a life of crime, they wouldn’t have the kinds of problems they have with law enforcement.

Apparently, “Black Lives Matter” to blacks only when one of their kind is dispatched in the act of committing a violent crime: The rest of the time their attitude seems to mirror the indifference of wildebeests, who stand by idly chewing their cud as they watch members of their herd being torn to pieces by predators.