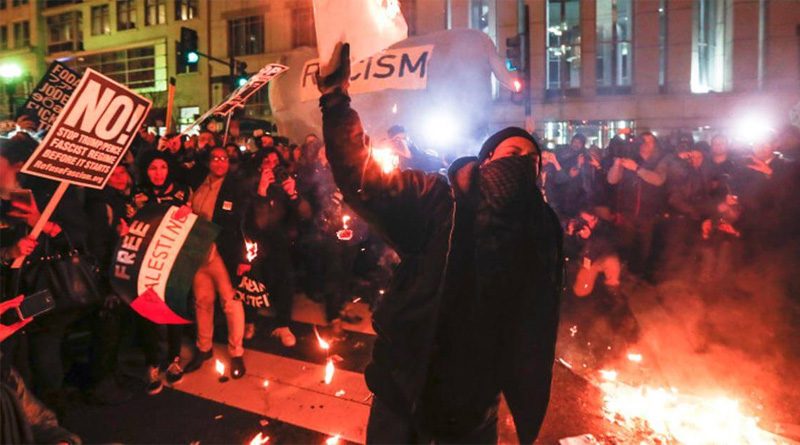 While the violent misfits of Antifa proudly call themselves anti-fascists – and liken their attacks on anyone they oppose to the heroic fight by resistance forces that battled the Nazis in World War II – in reality Antifa is a domestic terrorist organization.

This is why President Trump renewed his criticism Thursday of the far-left extremists for their role in the recent violence in Charlottesville, Virginia. And this is why Democrats and every American who believes in the freedoms guaranteed by our Constitution and opposes violence in pursuit of political goals should oppose Antifa as well.

“I think, especially in light of the advent of Antifa, if you look at what’s going on there, you have some pretty bad dudes on the other side also, and essentially that’s what I said,” the president told reporters Thursday. He is right.

It’s not just conservatives who are applying the terrorist label to Antifa. The U.S. Department of Homeland Security is reported to have formally classified Antifa activities as “domestic terrorist violence.” The FBI has also blamed Antifa for violent attacks at public rallies and against groups that Antifa labels as fascist.

Antifa will retreat when resisted. Like the bullies they are, Antifa thugs backed down when confronted by police Thursday night and did not carry out threats to disrupt a speech by conservative writer Ben Shapiro at the University of California at Berkeley.

Last year I and others cast the white nationalist and alt-right elements out of CPAC, the Conservative Political Action Conference. It’s time for the left to excise its own radical demons before the fire rages out of control.

But security measures cost taxpayers $600,000 to protect Shapiro’s right to free speech at the university that gave birth to the Free Speech Movement in the 1960s.

Antifa terrorists use organized and systemic violence to attack not just those they disagree with, but also anyone nearby. By design, Antifa is loosely organized. Each group operates mostly independent of the others, with variations on beliefs, tactics, and goals. Yet all are grounded in some form of anarchist, Maoist or Marxist beliefs. And all follow the standard operating procedure used by terrorists — Antifa members operate on a cell structure.

This structure makes it hard to pin down Antifa leaders or organizing principles, but we know it gives them greater power to bash skulls, silence their enemies and walk away unscathed. And they are enabled and empowered by their allies on the left – most of them inside the Democratic Party and the mainstream media.

Now let’s be clear. When I say Antifa, I’m talking about the organized thugs who go into the streets geared up to assault people and destroy property. These people are organizing to take violent action against any opposition.

To these extremists, opposition can simply be taking pictures of the wrong person. In Richmond, Antifa assaulted a reporter from a local TV station, bludgeoning him in the back of the head, creating a wound that had to be stapled closed. The militants then engaged in victim blaming, suggesting they had a right to split his skull open like an egg. As CNN’s Jake Tapper has pointed out, a number of journalists have been assaulted by Antifa across the country.

At this point Antifa is doing more than waging random violence against anybody who happens to be in the way. A report from the Center for Investigative Reporting’s Reveal News shows that Antifa is targeting specific individuals for violence. Antifa is also creating and distributing “Know Your Nazi” flyers complete with names, faces, and descriptions of their targets.

One Antifa terrorist named Dominic said: “The people on our list are targets, so they got injured.” But a large portion of those on the Antifa’s hit list aren’t neo-Nazis or white nationalists of any sort. In fact, not even close. Matt Labash’s must-read report followed Antifa target Joey Gibson, who Labash described by writing:

“As white supremacists go, Joey Gibson makes for a lousy one. For starters, he’s half Japanese. ‘I don’t feel like I’m Caucasian at all,’ he says. Not to be a stickler for the rules, but this kind of talk could get you sent to Master Race remedial school.”

Unfortunately for Gibson, the Antifa terrorists don’t see him that way. He was highlighted prominently on the hit lists and as this video shows, Gibson was immediately beaten as soon as Antifa spotted him.

The terrorist Dominic said of Gibson after the beating: “What does he deserve? He deserves potentially stitches or broken bones … . He wasn’t gonna get killed that day, we were strategic.”

How long until Dominic or one of his twisted comrades decides enough is enough and starts hunting Republicans like we saw on a baseball field in Alexandria? Because violence begets violence, and unless it is thwarted, it will only escalate with terrible results.

Like an out-of-control wildfire – mindless with no real goal save violence for violence’s sake – Antifa burns all it comes in contact with.

But in many ways, Pelosi was compelled to say something and has said nothing since. And then you will note the staggering silence of the Democratic Party in the face of continued Antifa violence.

Antifa terrorists only have room to operate when they can blend into crowds of people who just want to voice their disagreement with the Trump administration. If these violent goons have no place in those crowds, if they are intellectually abandoned and physically thrown out of polite society, then they will be marginalized.

The right of free assembly and free speech to express concerns about President Trump and any other elected official must be preserved and is protected by our Constitution. But there is no right to violent protest. The peaceful anti-Trump protestors should reject Antifa. And if they don’t, then their motives are suspect. They must ostracize Antifa immediately.

Liberals must also cool their enabling rhetoric because rhetoric has one aim: to stir emotions and drive hands and feet into action. It’s one thing to oppose the policies you disagree with, but the left has been consumed by an election denial, clinging to anything that might suggest President Trump and his supporters are illegitimate or didn’t win fairly last November.

Last year I and others cast the white nationalist and alt-right elements out of CPAC, the Conservative Political Action Conference. It’s time for the left to excise its own radical demons before the fire rages out of control. Antifa members are simply political arsonists. They’re nihilistic, acting as though they are protesting the coming of Fourth Reich, but they are acting just like those they claim they oppose.

Antifa members aren’t looking to light torches to shed light on abuses of power and communities in need of financial support. They aren’t your normal Democratic voters. They are methodologically stacking tinder and gasoline in the attic to burn down the American house.

Reasonable Democrats, and members of the mainstream media, if there are any left, should not hand them the matches to start that fire.

Source: Ned Ryun is the Founder and CEO of American Majority